Enjoy cooking
Browse through over
650,000 tasty recipes.
Home » Fitness & nutrition , Fitness amp; nutrition » 5 things you find out when you get a fitness tracker

5 things you find out when you get a fitness tracker

Should you buy a fitness tracker? Wearable technology and smart apps are big news in the health world, but how do they impact our lives and do they actually make us fitter? Discover how we got on when we embraced the world of fit bands, activity trackers and fitness monitors... 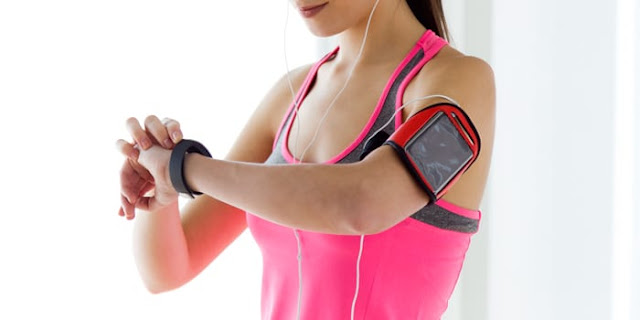 A multitude of fitness trackers have flooded the market in recent years, including big names such as Fitbit, Jawbone, Misfit and Garmin, as well as countless smartphone apps designed to measure almost every aspect of health. By the end of 2016 it's estimated there will be around 10 million wearable devices in use in the UK, with this number expected to triple over the next four years.
So does constant surveillance of our best (and worst) habits make us healthier? Good Food writer, Sarah spent some time immersed in her each and every step to help you decide whether it's worth investing...
Ignorance is bliss
There's nothing like cold, hard stats to make you realise how blissfully unaware you usually are. Logging my food and exercise removed the ‘health halo’ effect that you get from making one (supposedly) healthy choice, such as choosing fat-free (yet sugar laden) yogurt or going for a ‘run’ (and actually spending half that time catching Pokémon in the park). Unfortunately, intention does not equal action, and having the callous hand of technology overseeing my every move gave me great motivation to really knuckle down during my workouts, instead of just kidding myself that I was.

Checking your heart rate is addictive
With just a few swipes you can check your heart rate throughout the day on many devices. I had never done this before, and the novelty took a good while to wear off. Just ran full pelt for a bus? 121bpm. Lying in bed? 55bpm. Startled by a spider? 92bpm. Never before had I noticed how much harder my heart works just when I’m standing up compared to sitting down - I even passed up a rare seat on the tube just to see an increase in the number flashing up at me. Fascinating to me, almost painfully boring to everyone else.
Progress will not always be steady
As my obsession with quantified data took hold and I started ramping up the intensity of my workouts, I expected that every sweat session would be better than the last. Not so. My success varied wildly from day to day, seemingly influenced by a huge number of factors, such as how long I had slept, how much water I drank and how sore I was from the last workout. Whereas normally I might brush off a sub-par gym trip, having the tracker telling me exactly how much I was slacking was pretty demoralising at times. What I learnt was to stop looking at every individual workout, and instead look at my weekly or monthly progress for a more accurate measure of my success.

Small changes add up fast
Quick wins such as walking between tube stations, taking the stairs and drinking more water made a huge impact on my stats when I incorporated them into my everyday routine. One of the products I tested was the Apple Watch and the 'nagging parent' functionality, taps you on the wrist and tells you to get up and away from the screen every hour. Not only do your eyes and brain get a break, but just standing up gets the blood pumping around your body. Before, I would put aside an hour to workout and see the rest of my day as fairly sedentary. It was satisfying to see how snippets of activity add up throughout the day, making it feel really worth while to complete some simple exercises in a spare 10 minutes here or there instead of sitting still and scrolling through Instagram.
A tracker can only tell you so much
Yes, the trackers told me exactly how many steps I had taken, or my peak heart rate during a workout. It told me how many litres of water I drank, or how many ‘active calories’ I had burned. But what it couldn’t tell you was how much happier it made me to eat a slice of my colleague's birthday cake rather than a piece of fruit, or how much more relaxed I felt after a lazy Sunday lie-in, rather than dragging myself out the door for a run. The danger with trackers is how quickly you get caught up in them, and how rapidly your entire life seems to be reduced to numbers. I still enjoy using my tracker during workouts and for short bursts to monitor my everyday activity, but I’m quite happy to take it off and focus on living for the majority of the time.

Here’s how the rest of the team got on with their trackers…
Gillian Carter, Editorial Director
I monitor my steps with the health app on the iPhone - and I've found out how challenging it is to reach the recommended 10k steps a day if you work in an office. You have to build in walking periods - just walking to the next bus stop doesn't cut it!
Natalie Hardwick, Features Editor
I downloaded the Strava app to track my 10-mile cycle to work. There were lots of things I liked about it – it measured calorie burn, road gradients and peak speeds, all of which was shareable, and it was good to have my route recorded. However, it brought out my competitive side, and I don’t think trying to beat previous performances on a busy central London commute is advisable - road safety should be paramount! I’d also feel down on myself when statistically I hadn’t performed as well despite putting in as much effort as the day before. I deleted the app after a month as I preferred to go back to basics and time my cycle with a good old-fashioned watch!
Rachel Bayly, Art Editor
I’m in love with my Fitbit! I track how much I’m sleeping and love monitoring my heart rate - since getting it in December it's gone from an average of 70-74 to 51-54, just from walking more. I love having daily targets - they really encourage me to walk up the escalator to get an extra flight of stairs in - and competing with friends is a great source of motivation. I jog on the spot when I’m cleaning my teeth to meet my goals, and walk the long way home - even in the rain. I could talk all day about how much I love it!
Georgina Kiely, Digital Assistant
I use MapMyRun in the brief, glorious window on a weekend when I can muster up the energy for a sweaty 5k. It uses GPS to monitor my admittedly limited activity, suggests popular running routes from other users and even logs a food diary. The GPS tracker is the main feature I use - it’s easy to set up and gives me a breakdown of average speeds every kilometre. The only downside is the inevitable patronising follow ups. ‘You ran 5k! Well done, that was your 4th fastest time ever! See you again soon!’ You might see me again soon, you might not, don’t judge me, app. I’ll jog when I’m good and ready.
Do you use fitness trackers? We'd love to hear your experiences - let us know in the comments below...
SHARE SHARE SHARE

Sign up for our newsletter, and well send you news and tutorials on web design, coding, business, and more! You'll also receive these great gifts: